University is a great place. You’ve finally got some independence, you can reinvent yourself so that nobody has to know what a loser you were in high school, you can try new things and meet new people. It is also, a hive of activity, there is loads to do and so much to get involved with. From Clubs and Societies, to Sports Teams, you can make plenty of new friends or have a potential romance…but approach with caution, not every man you meet in a sports team will be your Prince Charming. 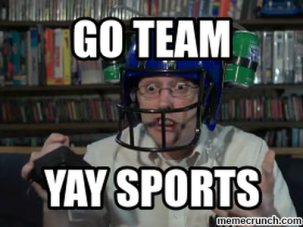 Here’s a definitive list of the guys you will meet in University Sports Teams…and my experience with each of them.

We’ve all seen this guy on campus. Everyone knows who he is and every girl he speaks to is just a new target. This guy will probably try and booty call you at some stage. If you do, please take anything he says with a pinch of salt…he probably has a girlfriend he’s not told anyone about. He’ll ignore you after he’s slept with you but it won’t make an iota of difference to your life. I promise.

AVOID. AVOID. AVOID. If you are further along in your time at university, do yourself a favour and just don’t bother. You’ll spend the years you’ve got left at uni trying to avoid them and all their teammates will ridicule you both at any given opportunity. Also, the sex will be B-A-D, Bad!

If you sleep with this guy, you’ve essentially won the university lottery! He’s the best looking guy on the team and your friends will be insanely jealous. Even though this man is an Adonis and probably your only claim to sexual fame, he will also be really, really stupid so don’t expect an intellectual discussion afterwards. Oh, I almost forgot…just make sure he’s not lying to you about his age either.

Out of all members of a team, this guy is probably the best. He’s the butt of all the team jokes, but he actually has a heart of gold. He’ll watch Disney films with you and you’ll spend the entire time giggling like an idiot. He won’t ignore you when you see each other in lectures, he’ll make an effort to make you smile. This guy is an all round good egg. If you have to get yourself a sports team man, this is the one for you.

Everybody knows there is a massive drinking culture in university sports teams, and some can hold their drink better than others. Unless sloppy, messy, mediocre sexual encounters are your thing then just wait until they’re a tad more compos mentis. Here’s a list of things drunk sportsters have done:

Now, this category is a tricky one, because it can be divided into two types:

Type A: The guy everyone loves! This guy is great, he’ll always offer a hand when you need it, nobody has a bad word to say about him, and he’ll be absolutely mortified when you tell him what his teammates have been up to. He has the respect of the team and the campus as a whole. He’ll try to be a lad, but everyone knows that he doesn’t actually have it in him. He probably has a long term girlfriend from before he came to uni, and will probably marry her.

Type B: The Promo Wanker. This guy really thinks he is a Big Name On Campus. He’ll sleep with you to look cool to his mates, encourage brutal initiations and more than likely suffers from a Napoleon Complex. People like that don’t generally go on to great success, so don’t be too disheartened if things don’t work out with this guy. By the time you graduate, you’ll be going on to travel the world or start an internship at the company of your dreams. He, on the other hand, will be the manager of the shitty nightclub and think it’s cool.

Basically, the advice I’m offering is that while you’ll have a lot of fun at university, don’t expect to meet your future husband on the men’s hockey team…

Now if you’ll excuse me, I’m off to sip my wine and watch the men I went to university with frantically scroll through this post to work out if I wrote about them. Good luck boys!